Almost 600 nominations were considered before the Clean50 and 10 Emerging Leaders were selected.  Gavin Pitchford, the Clean50 Executive Director and Delta Management Group CEO observed, “While the contribution of some winners such as Minister McKenna’s enormous contribution to protecting the environment, pricing carbon and pivoting Canada towards a much cleaner energy path are more high profile - every person on the Clean50 list has made substantive and significant contributions. Excellent examples include two of our R&D winners, who have made headlines in scientific circles around the world for the groundbreaking ways they capture carbon in algae, and return plastic to its virgin state.”

Mr. Pitchford went on say, “Selecting Clean50 winners becomes more exciting each year. We have the luxury of considering nominations from across the country with an amazing range of backgrounds. For instance, this year winners include tidal power pioneers from Nova Scotia, an Alberta oil company executive, a cricket farmer from Ontario, BC civic leaders who are revolutionizing our approach to waste, and scientists and CEOs from Quebec and Ontario who are capturing carbon.”

On September 28, over 110 Clean50 incoming and alumni members will gather in Toronto for the Clean50 Summit 7.0. Working sessions with 10 different groups of thought leaders will consider solutions to climate change related issues, seeking to speed collaboration on solutions that can be implemented before Canada’s 175th birthday. The sessions are followed by dinner and awards.

The winners, their affiliations, locations and related information will be available, post 10:00 a.m. September 20th, go to www.clean50.com for more information.

The Clean50 Summit will convene at the Royal Canadian Yacht Club island location on September 28th from 11:00 am to 9:30 PM. Media who wish to attend the Summit must RSVP to due to the event location Photo ops will commence at 5:30 PM, the awards ceremony and dinner begins at 6:30

For more information or to schedule an interview contact Gavin Pitchford, 416-564-8627.

About the Clean50:
Founded in 2011 by Gavin Pitchford and Delta Management Group, the leading sustainability, CSR and clean tech search firm in Canada, Canada’s Clean50 Awards and Clean50 Summit provides a means of bringing together thought leaders and environmental experts to tackle sustainability problems, and to recognize and promote their accomplishments in the hopes of inspiring action by others. This is the seventh iteration of the awards, and they are considered the leading individual award for environmental and sustainability focused achievement in Canada. 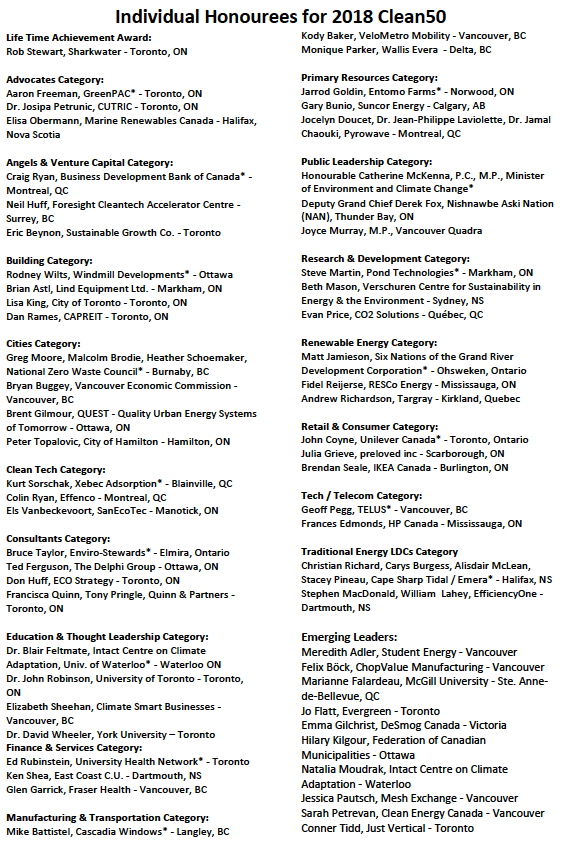